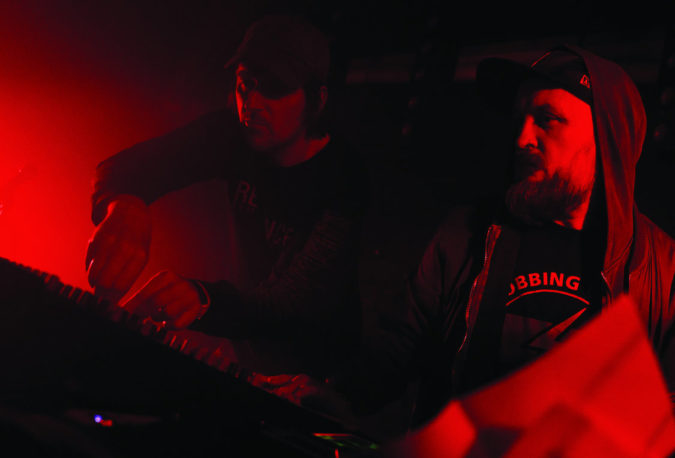 When it comes to completely outside-the-box, mind-melting aural manipulations of an altogether otherworldly nature, very few names elicit the degree of interest that Justin K. Broadrick‘s does.

With a pedigree that would seemingly fill a library, Broadrick is a sound manipulating wizard that nearly no one could hope to claim rivaling. Yes, “nearly”, for there are a select few peers to Broadrick existing in the world today. Without question, one of them is musician, record producer, and all-around brilliant sorcerer of sound, Kevin Martin. He and Justin are no strangers to one another either, the pair have collaborated together in a multitude of projects over the years, including the one reported on here today, ZONAL.

As a founding member of industrial metal abomination Godflesh, to his work in Head Of David, Techno Animal, and Ice in the past, or Jesu, Curse Of The Golden Vampire, or JK Flesh in recent times, Justin K. Broadrick is indeed a trailblazer. One of those past projects, Techno Animal, aligned Justin and Kevin together during the beginning of the Nineties. This resulted once Martin launched the groundbreaking group, God, in 1987, nearly a year before Justin’s Godflesh was born. Eventually, Justin joined Kevin in God, but not before he served to produce some of the band’s earliest releases.

This working partnership between the two led to the creation of Techno Animal in 1990. There, with Broadrick credited as “JK Flesh” and Martin as “The Bug“, the pair gave us a decade’s worth of releases. The last of them arrived in 2001, before JK and The Bug would move on to other ventures, but not before laying the groundwork for ZONAL with a recorded offering in 2000, ‘The Quartermass Project: Volume 1‘.

ZONAL was reactivated in 2017, and in the following year was joined by Camae Ayewa – the American poet, musician, and activist better known by her stage name Moor Mother – amazed Roadburn Festival attendees with a collaborative performance. With ZONAL‘s intriguing, masterful crafting of hypnotic audioscapes, their output stands second to none.

Today, ZONAL announce they have signed with Relapse Records and are preparing for the upcoming release of a full-length album. Though very little else is known at this time, the album is expected to arrive this Fall and ZONAL is giving listeners a minimal taste of its contents now. That appetizer is presented by means of two songs that will be included on the recording when it does arrive, “Cage Version” and “No Version“.

Streaming here via Bandcamp, both songs are currently available as an NYP (Name Your Price) item HERE. You will find they possess radical departures from the earlier output of ZONAL, where it was rife with fast-paced dance beats and other techno type elements. Instead, in this latest output, we experience slowly advancing, throbbing pulsations of ambient rich headiness, looping itself around our brains as it explores inner space and outer sound simultaneously.

According to a press release accompanying these tracks:

“Zonal continues where their previous collaboration Techno Animal left off (R.I.P.), and combines a brutal ongoing obsession with beats, bass, dub, drone, noise and riff. Under their new guise, the duo push the parameters further and deeper, as their sound has become ever more corrupted, corroded, slower and lower; with the theme of exploring inner/outer space acts as the gelling agent for this shockingly monolithic sound. Anyone who witnessed their sonic destruction and lyrical detonation c/o Moor Mother at both Roadburn and Unsound festivals will not be disappointed by the slo-mo meltdown.”

Enjoy these songs, from ZONAL at Roadburn Festival 2018: