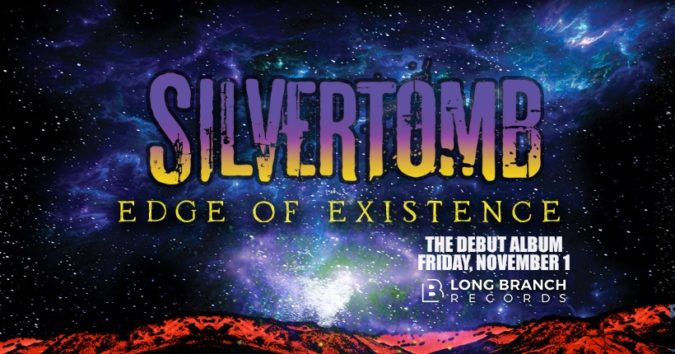 It has been nearly one year since Brooklyn, New York’s SILVERTOMB issued their first single, “Insomnia“, in September of 2018 – reported HERE at Riff Relevant.

Now the quintet return to announce the upcoming arrival of their début album, ‘Edge Of Existence‘, due November 1st via Long Branch Records / SPV. The update includes the revealing of the album’s artwork, tracklist, and a new single, “Love You Without No Lies“.

Kenny Hickey offered the following insight into the song saying:

“The first song written for the record ‘Edge Of Existence’, “Love You Without No Lies” was conceived before keyboardist Aaron Joos was added to the lineup. Keyboard was then retrofitted into the song. The piano intro was originally a guitar intro played by Joe James and distorted keys were added to the verses and Hammond organs to the choruses. The lyrics question whether love is possible without some degree of conscious concealment or dishonesty.“

The manifestation of the imminent album offering from SILVERTOMB has been a labor of love for Hickey, yet one inspired by times of loss and despair. The songs contained upon ‘Edge Of Existence‘ are cathartic compositions derived from his personal struggles with addiction, love, and suicide. All of which was compounded by the death of singer, frontman, and friend Peter Steele in 2010, and the subsequent disbandment of their band Type O Negative.

Artwork adorning the ‘Edge Of Existence‘ album cover, inspired by a concept from Joe James and Kenny Hickey, has significant relevance, as well. The idea was to capture the classic look of black light, Sci-Fi poster art popular in the 1970s. The central skeletal figure on the front cover was modeled after the famous images of The Ascension Of Christ, with Hickey posing for the piece and artist Rodrigo Canteras sketching the image of the robed skeleton over Kenny’s image.

The fully realized SILVERTOMB is the latest band to be spawned from the ashes of Type O Negative, alongside the also currently active A Pale Horse Named Death (started by former T.O.N. drummer Sal Abruscato). Interestingly, Johnny Kelly is the drummer in both bands, but their musical paths diverge at that point with APHND pursuing a more Gothic doom-oriented sound and styling.

On the other path, SILVERTOMB seems more inclined to explore elements of psychedelic and classic rock, along with nuances of early, heavy proto-metal. Hear this for yourself by streaming “Love You Without No Lies” below, where we have also included the previously presented “Insomnia / Sunrise“.

‘Edge Of Existence‘ is available on CD, LP, and digital formats, it is due for release November 1st from Long Branch Records / SPV. Pre-order is active with options found HERE.