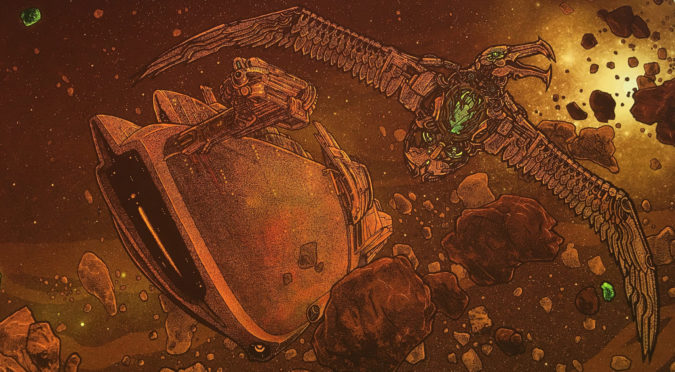 Real talk for a moment, I don’t see the oh-so-famous Huntington Beach, California, which is smack dab in the midst of The O.C. (Orange County), as being a hotbed of stoner rock.

It could be for all I know, but not if all the music info and knowledge I’ve absorbed over the years is legitimate. There is a crossover world at work there it seems, one where those with talents are able to take a dab of this and pinch of that, and blend. It’s cool, too, as for the most part it generally makes for an interesting music scene. As for my prior referral to “stoner rock”, I was being a bit sarcastic, as I feel that the heavy music news outlets have misconstrued something.

That something is none other than our subjects, ALBATROSS OVERDRIVE, and their recently set loose third studio full-length, ‘Ascendant‘. This is a band, one currently consisting of Art Campos (vocals), Rodney Peralta (drums), Andrew Luddy (guitar), Derek Phillips (guitar), and Mark Abshire (bass), that is constantly cast as a stoner rock band. Yet, while true to some extent, this band is also something of a magnanimously designed vehicle, one not beholden to any particular music genre.

You can tell that in every moment, each passage, element, and aspect that is embedded in the genetic makeup of ‘Ascendant‘. That is, assuming you will be able to catch your breath somewhere along the way of “On The Ledge“, the energized first track. With the dizzying, pumping rhythm section that drives this cut like a locomotive or the fiery guitars burning their way through it, the band sets the bar quite high off the line.

The equivalent of slamming hard on the brakes is what “The Sleeper” yields, as yet another aural vibe takes hold. Fuzzy, thick riffs in a rather unique tone are emitted and things accelerate, as this desert rock beckons. Hazy and sweaty, the song’s title seems to manifest in the now meandering state of lysergic blues that eventually come our way.

Title track “Ascendant” arrives with a bit of sound manipulation, like that of a dragster idling on the line and awaiting the green light. It comes in a neck whipping, fuel-injected launch into the song, held steady for the duration of its high octane burn. Half-way through this number, things begin to coast, riding along right there in the pocket of this mesmerizing masterpiece.

Trust me, the astound and the astonishment is far from over, as the guys elevate the bar again with “Come Get Some“. There are dark and stark realizations to be culled from this sweltering, slow instrument incineration. Factor in the poignant lyrics serving to testify on behalf of our protagonist and this is a formula for one hell of an enthralling composition. ‘Come Get Some,‘ indeed.

If that is some sort of a call-out, then the next track should serve as a command for one to “Live Love Laughter“. With smoldering music packed with intense grittiness and immense groove to boot, the soulfully crooned vocals follow suit. The animated jamming of the song’s latter half sets quite a mood, one that feels perfect for some stellar guitar pyrotechnics.

“Undecided” is anything but, with a precise chug about it, this Kyussian rock tune inspires the heart to beat a bit quicker. The gravelly duel vocals near the end, along with the actual ending itself serves to provide a fluid transition into the final song, “Pity Pie“. A slightly jazzy improv feel takes hold, lingering with sedate nuances radiating from it, soulful and emotional. It provides an ending that is totally across the spectrum from where we began this journey. Yes, the cliché “from one extreme to another.”

That is why ALBATROSS OVERDRIVE should no more be short-changed as just another stoner rock band. They are a rock band, yet simultaneously, they are a metal band, as well as a bit of a psych-desert band. All of that and some of this, along with a lot more and this is the perfect recipe, as evidenced by ‘Ascendant‘ from Train Wreckords.

Out now, streaming here and available for further streaming and purchase at Bandcamp.