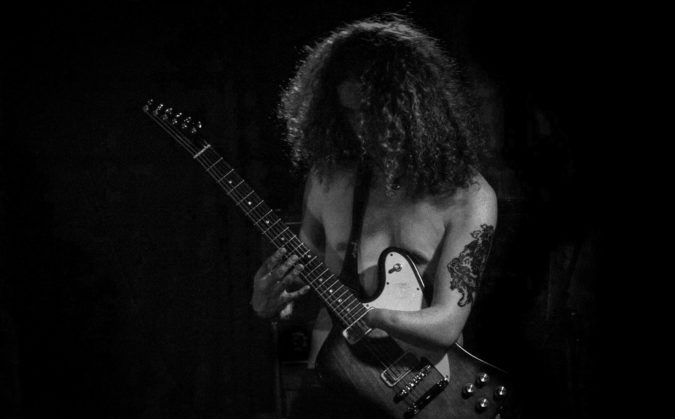 Northern Ireland’s ELDER DRUID has had a busy five years of existence. Releasing a handful of singles and EPs (both ‘The Attic Sessions‘ and ‘Magicka‘ in 2016), as well as two full-length albums (2017’s ‘Carmina Satanae‘ and 2019’s ‘Golgotha‘), the metal sludgists have without doubt hollowed out their own cave of doom.

ELDER DRUID guitarist Jake Wallace has currently been working on recording some music for a track on the upcoming Stoner Rock World Wide community album, but we’ll find out what else Jake is up to in 2020, as he’s here to be our eleventh piece in the Gear Assembly! Rock on…

I realised I wanted to play guitar when I was around 17. Being born missing my left hand, I never really considered it, but I got fed up with the fact that it might be impossible.

I was mainly influenced by a street busker called Richard Blues that I saw at Edinburgh Festival in 2010. I had never really listened to appreciate blues until I saw him play and that completely flipped the script.

I turned a right-handed guitar upside down because I couldn’t afford a left-handed guitar at the time. I fretted with my right hand and learnt everything upside down, using one of my undeveloped finger stubs as a plectrum of sorts.

I got into blues in a big way and idolised guys like Stevie Ray Vaughan and Albert King (who actually played the same obscure way as me).

I’d say “Rogue Mystic”. I remember trying to come up with a riff that I really liked about 4 or 5 years ago in the summertime.

Doom/sludge is the kind of genre where obviously riffs are very simple but very effective. I was finally happy with the riff for “Rogue Mystic” and just loved the simple, yet powerful sound.

The first time we played it was in front of a huge room of people at Whelans in Dublin during Canalaphonic Festival, supporting Ten Ton Slug and Two Tales of Woe and it went down so fucking well. Really gratifying moment.

I use pretty much the exact same setup in the studio as I do live. Makes sense to refine your live sound in the studio so you know exactly how to tweak everything when you get up there.

Having a few pints. There’s not much else that I really need or want before a show other than a few cold ones to loosen the joints and get ready to riff.

We usually have around 10 songs that we plan to play on tour, but maybe only play 6/7 per night.

It gives some space to switch the set around or add/subtract whenever we feel like it. It’s always good to have an encore up the sleeve should the moment present itself.

Probably the absolutely ridiculously absurd way I play. The guitar is right-handed and flipped upside down so my thickest string is at the bottom.

This means when I’m down-strumming, I’m hitting the higher strings before the lower ones, giving my chords a slightly more treble heavy sound.

This works great, as we have another guitarist in the band so when we’re both hitting the same chord, you’re getting both sides of the spectrum which gives a really cool complete sound.

I’ve had it from the very beginning of Elder Druid and many times I’ve thought about either upgrading to the 100w version or maybe trying an Orange or Matamp head, but I’m a firm believer in not trying to fix something that isn’t broken. It’s the perfect head for me.

I run a small fest in Belfast called Crypt of the Riff, where I basically put on 7 to 8 bands and do these events 2 or 3 times a year. I really enjoy how it has been slowly building up, as it started off as a random idea in my kitchen one day.

I’ve had bands such as Garganjua, Ten Ton Slug, Dead Witches, Conjurer, and Tuskar headline so far; and I’ve booked the infamous Stoned Jesus for Vol. 5.

I also do a lot of graphic design / web design in my spare time. I’ve been working for Jon Davis from Conan / Black Bow Records / Blackskull Services for a couple years doing merch mock-ups / tour posters / EPKs, etc., so I’m constantly doing something creative on my laptop.

I also have a page called Phantom Limb Graphic Design where I do a load of my own personal stuff. Mostly photographs that I have edited or manipulated in one way or another to look cool.

I really love how great the whole Irish scene is at the minute. There’s a wealth of fantastic bands and the entire island just feels a hell of a lot more connected and united over the last 10 years or so.

Slomatics have also been a massive influence for me. One of the greatest heavy bands in the world in my opinion and they’re from the same city as us. I’ve seen them more times than any other band ever and they still blow me away every time.

Other honourable mentions from Ireland would be So Much For The Sun, zhOra, Coroza, TOOMS, Hornets, Ten Ton Slug, Two Tales of Woe, Iona Death Cult, Slung from a Tree, Molarbear, The Crawling, and Strangle Wire.

There are fuckloads more, so please go check out the Irish heavy scene, but those are the ones that come to mind!

Get into a band as soon as possible and play as many god damn shows as you can. There’s no better experience or learning curve that being up there and figuring out what you’re doing right or wrong firsthand.

You meet so many people from playing shows and most of the biggest shows we’ve played have been because we were in the right place, at the right time, talking to the right person.

You could spend a year sitting in front of your laptop trying to promote your band, but the real kicker is getting out there and meeting people face-to-face.

So far, we’ve had a few of our upcoming shows cancelled, which sucks, but its been impacting people all over the world in much more severe ways than having a gig cancelled.

We did a livestream [in March] actually on Facebook from our rehearsal room and that was great. The video has almost 5k views in the space of 24hrs and we seemed to connect with a load of people all over the world. It was really cool to play a kinda private concert for all those cool cats than tuned in so cheers to them!

Honestly, the exact setup I’m using right now. I love my sound and I don’t really believe in spending hundreds or thousands on super expensive gear just because somebody else says its good.

Don’t get me wrong, if that’s what someone wants to do, by all means work away because there’s also the sense of achievement where you’ve finally secured that setup you’ve always wanted.

Fortunately, I feel like I’ve found what works for me and as much as I’d love to have that kinda money to spend, i’d rather keep what I have and spend the money on beer and records.

Cheers to Leanne and Riff Relevant for inviting me to take part in this. Wash your fucking hands and stay safe in this crazy world we now live in. Peace!