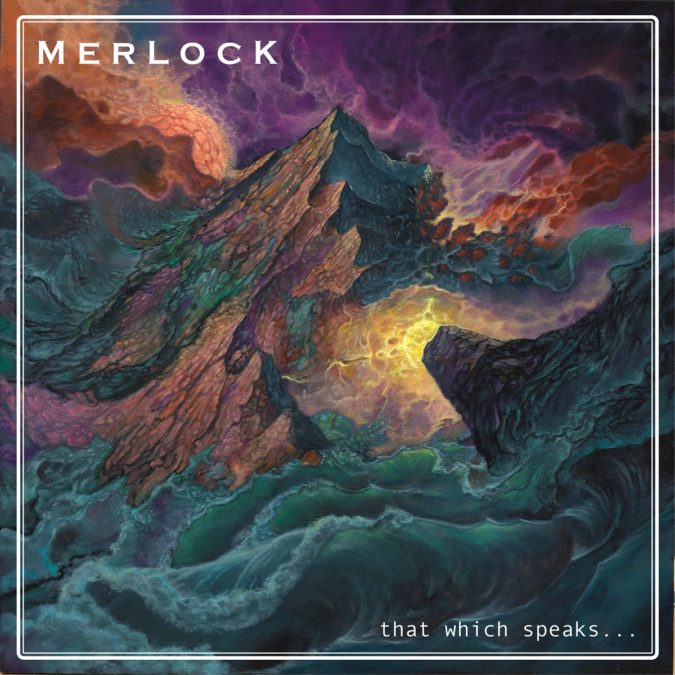 Formed as a traditional heavy metal band in 2017, MERLOCK quickly found themselves drawn to heavy, psychedelic depths.  Their self-titled demo captured this original, mercurial aesthetic and was independently released in Spring 2018. The band then focused on touring and grinding shows out in the Pacific Northwest and their regional Spokane, Washington area. The more they played, the further the band moved away from their traditional heavy metal roots in search of something more luminous.

After relentless touring and practice, the band entered the studio in December of 2019, with local recording mastermind Bill Nieman. The band emerged with four tracks, which explore the psychedelic shadow realms of self-doubt, alienation, and aimlessness. The new MERLOCK ‘that which speaks…‘ EP is set for full release on July 10, 2020.

“‘that which speaks…’ was written in a time of difficulty, hardship, and growth for everyone in Merlock. Lyrically, it has a lot to do with trying to blossom into a better person, which often means pulling some deep, painful roots. There’s a lot you have to reckon with in order to progress as a person – I think that’s the tension of the album for me.

The recording process for this record was a little intense for Merlock. We recorded over the process of three days. It was the first time we’d really had to play our parts in a vacuum, so there was this difficult isolation and frustration, but I think that tension plays a huge role in the sound of the album.

The name is referenced in the final track, “condemnation.” It all sort of descends into this madness and this manic, schizoid voice arises. I’ve always been really interested in the episode of The Next Generation, where Tasha Yar dies at the whim of Armus, this black, oily creature made from an entire planet’s abandoned evil. ‘that which speaks…’ is a sort of creature like that: an expulsion of filth.”

[Find out more about Taylor from one of our Gear Assembly interviews.]

With an ominously beautiful cover done by artist Anthony Hurd, the ‘that which speaks…’ EP was produced by Taylor Waring, recorded and mixed by Bill Nieman in his Spokane, WA studio, and mastering done by Randal Darabosh at Sky Ranch Studios in Oshkosh, WI.

With a disdain for the desaturated, ‘that which speaks…‘ insists on shimmering through the confines of doom.

On July 10th, the release will be available for digital download via Bandcamp and streaming through most outlets. The cassette format via Wandering Reliq will also include an unnamed bonus track, and is only available on the physical tape. Order at Bandcamp.