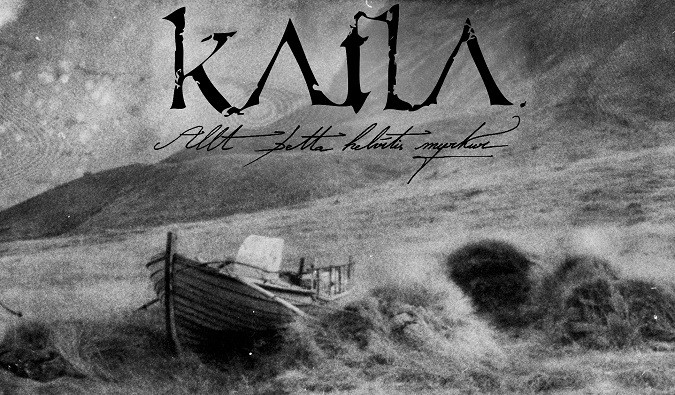 The infamous Icelandic low is defined as a large and persistent atmospheric low-pressure center that forms between Iceland and Greenland and is often the cause of strong winter winds over the North Atlantic. KATLA artistically translates this meteorological depression into dark doom-infused metal and deep musical emotion.

An urgent sense of darkness and inner turmoil drives ‘Allt þetta helvítis myrkur‘ (“All this damn darkness”), the second full-length of the Icelandic duo, soon to be out on Prophecy Productions. The soul-crushing heaviness fueling this record makes KATLA‘s melancholic debut album “Móðurástin” appear nearly light-hearted by comparison.

Some of this album’s core compositions reach back in time for more than a decade and were born out of spontaneous rehearsal room sessions that were only now given final shape. The result is a cinematic musical stream of consciousness, in which many of the songs intertwine and flow into each other.

KATLA are the conceptual and musical brainchild of vocalist and multi-instrumentalist Einar Thorberg Guðmundsson (Fortíd, Potentiam) and former Sólstafir-drummer and visual artist Guðmundsson Óli Pálmason. The duo deliberately took their name from one of the most active and feared Icelandic volcanoes to manifest that the external part of their inspiration relates to the island’s ever-changing landscapes and subpolar climate.

“The outer landscapes are as important to us as the inner darkness,” tells Einar. “KATLA are as much a product of our environment as derived from our state of mind.”

KATLA takes their art very personally, even beyond musical aspects. Cover art, photography, and the handwritten booklet – everything about ‘Allt þetta helvítis myrkur‘ has either been created by the duo or by their relatives and close friends. “We like to keep things in the family,” Guðmundur Óli points out. “Everything is homemade yet up to our high standards.”

Today we have the first single “Villuljós” streaming below via Bandcamp, as well as the official video for the special song, “Farg,” which is exclusively available as part of the bonus EP ‘Blótar gömlu goðin‘ included within the artbook of ‘Allt þetta helvítis myrkur‘.

“The Icelandic word ‘Farg’ refers to a heavy burden,” writes Einar Thorberg Guðmundsson. “A very dear friend of mine carried such a heavy burden all his life and eventually died far too young. His story would easily fill a book, if I could bring myself to write it. For the time being, all I want to say is that I wrote this song as a means of self-therapy and to send a message out to the cosmos.

After many years, I have finally come to terms with his passing. The weight we carry should rightfully only belong to the living. May he rest in peace. ‘Farg’ is dedicated to Sverrir Örn Ólafsson (27 December 1979 – 28 August 2012) – never forgotten.“

Order any of the above options from Prophecy Productions.