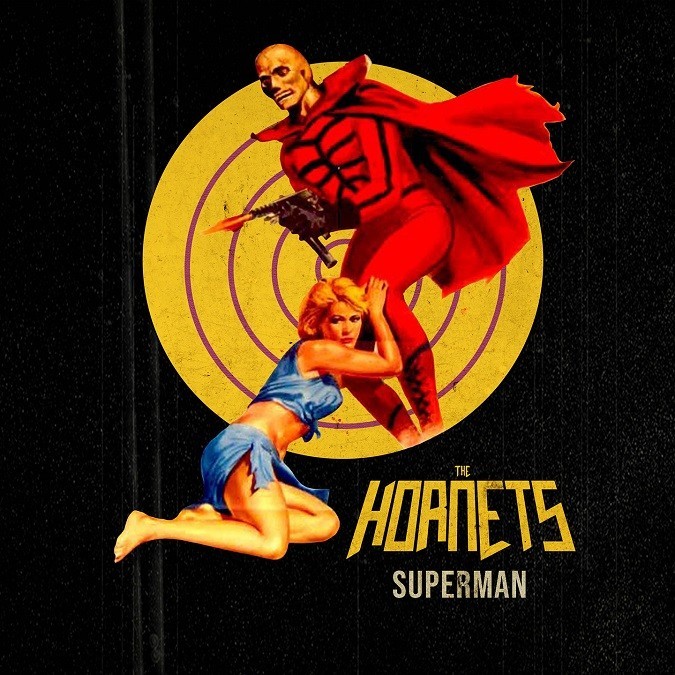 THE HORNETS took flight from Modena, Italy in September 2016 and today we have a premiere of the new video single for“Superman (Nietzsche),” off the band’s debut album ‘Heavier Than A Stone‘. The coolest nights, you know, happen by chance. For THE HORNETS and the release of their first album, it was more or less like that.

A band formed for fun, for leisure, to get out of the usual work routine, to give voice to some love failures, or to flip off a bad day, or simply to escape from other musical projects. Everyone had already some musical experience with them and the results came without problems. A human sound, sincere, all-around Seventies! The rest is easy: it was enough to attach the guitar to a Fender Supereverb with the volume at 8, a couple of badass drum fills, and oh well, the bass (because there must be one…). Then a series of “one shot-one kill” indie singles from 2017, and soon the garage rock of ‘Heavier Than A Stone‘ was born.

Featuring nine tracks of pure and passionated rock’n roll energy, the band’s debut full-length record will be coming out this summer via mighty Go Down Records. These are the simple points from which the idea of the record starts: raw elements, belonging to each of us, sincere, alive, waiting only for the hands of some asshole (in this case The Hornets) to make them shine and give them a musical life and, of course, they could only be pronounced to the sound of rock’n roll, plain and simple.

Everything is seemingly easy, smooth, or obvious, that’s nonsense! The realization of all this, and of what has been said, was long, heavy, but at the same time lustful, and the result that was born out of it is just as much!

With their premiere of a new single happening now, we have a bit of insight from the band on “Superman (Nietzsche)“:

“The ‘superman’, a talented figure, idolized and envied by all for some particular characteristic, but which at the same time creates discomfort and a peculiar annoyance that only very few are able to admit and show. Aren’t you one of those very few? Here is the right song! ‘Superman (Nietzsche)’, the second single from The Hornets is an edgy, neurotic song, played with particular vital energy with an undefined vocal line, but what does it matter – guitars do it!“

‘Heavier Than A Stone‘ Tracklist:

The Hornets debut album was produced by Alessandro Tedesco, and recorded by Daniele Andy Andinetti in November 2020 at Music Inside in Modena, Italy. Mixing and master were done by Daniel Grego at Mal De Testa Recording Studio, in Tombolo, Italy. The album artwork is by Valentina Pini.

The new album ”Heavier Than A Stone‘ is due to be released on Friday, July 16th, 2021, and will be available in two vinyl formats via Go Down Records, as well as digital streaming on most major outlets. You can pre-order a physical copy now at the following: