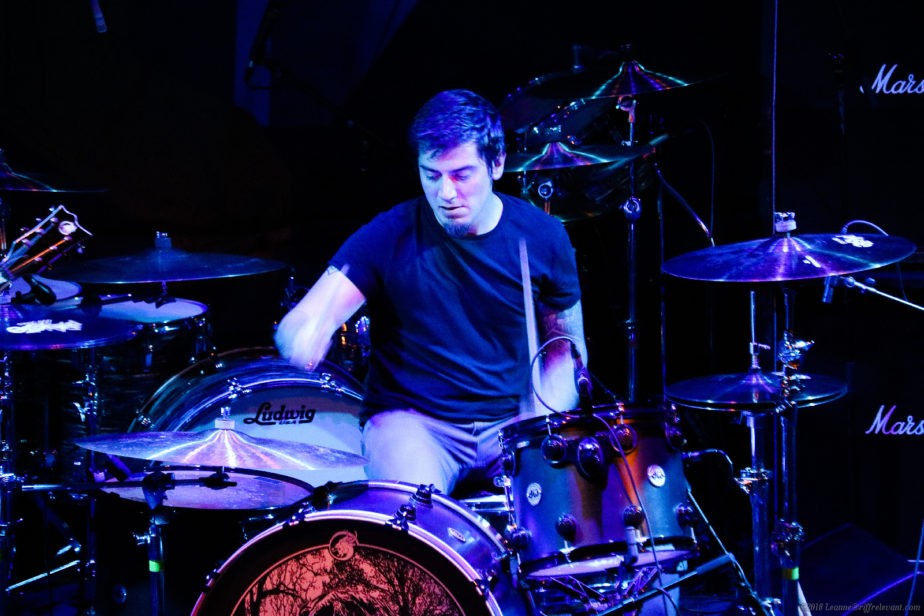 FOUR ON THE FLOOR – THE DRUMMER’S SPOTLIGHT #5:  JONO GARRETT

It really is completely unfair just how great a drummer Jono Garrett is.

When you first hear and see him play the drums, the initial thought that comes to your mind is… POWER! I originally witnessed Jono’s playing first-hand when my band opened for Mos Generator at our show in Boston. I was mesmerized the entire set. Jono hits harder than a freight train, but with the delicate precision of a surgeon. For those of you that know me, you know that these styles of players are especially near and dear to my heart.

In addition to his incredible work with Mos Generator, Jono has also played in a progressive-death metal band called Turbid North. These vastly different styles of music may help explain his powerhouse approach to playing. Sheer force and finesse are what come to mind when I watch him play.

I’m truly honored to have the opportunity to talk shop with Jono Garrett and believe me when I tell you… when you see him play, you’d best bring a pen and a lot of paper to take notes.  —Brendan

JONO: Over the last few years, the drums have varied in-studio from DW, Ludwig, Gretsch, and Sonor. The configuration, as well. The toms might be different sizes and make than the kick.

There’s a Pearl Vinnie Paul Snare at HeavyHead Studios that makes it on to a lot of recordings. I do prefer Paiste Cymbals in the studio and on stage.

Riff Relevant [Brendan]: When was the exact moment you realized you wanted to play the drums? Who was your primary influence at that moment? What life lessons did you take away from those influences?

JONO: I had an interest in drumming for as long as I remember, early in childhood. Then it would have been the bands I was exposed to through my older brother.  Alex Van Halen and Neil Peart were heroes. When I got into metal as a teenager, drummers like Igor Cavalera, Dave Lombardo, and Raymond Herrera really resonated with me – very powerful players.

Fast forward a few years and I found extreme underground music, which blew my head off. Dbeats, blastbeats… some of those guys were really pushing the limits with speed and execution, it just sounded furious.  From there, I grew to appreciate the fusion/ jazz/ prog guys like Tony Williams, Billy Cobham, Steve Gadd, Bill Bruford.

What became apparent to me, even when I first started drumming, was that the drummers I thought were incredible, were so because they dedicated and invested a lot of time into the instrument. You don’t become “that guy” without putting in the time.

Riff Relevant [Brendan]: Which Mos Generator and Turbid North songs best exemplify you as a drummer? Do the different music styles of each band influence or cross into your performances with the other?

JONO: It’s a little tough for me to nail down any single tune from either band. With TN there are a lot of double bass, blasting, fast tempos. It’s fun to have that outlet. It pushes my abilities on a physical level, as well.

I wouldn’t say one crosses into the other, but I try to take the same approach in either, or any, band I play with. Serve the integrity of the song first. It’s easy to make a mess out of a song by over-playing or over-simplifying and not contributing enough on the instrument.

Riff Relevant [Brendan]: Do you have any type of pre-show warm-up rituals?

JONO: I like to stretch my hands and wrists before the show. I’ll typically just blast through 16th notes, alternating accents, and sticking patterns. There are a few rudiments I’ll run through, as well. That usually gets me loose.

For the faster aggressive drumming, I’ll have a cup of coffee and smoke a joint before the set. For the rock gig, it’s usually a couple of Heinekens to warm me up.

Riff Relevant [Brendan]: Since Mos Generator recently finished up its ‘Road Rats Tour‘ out on the road with Fu Manchu, how do you keep things interesting while playing night after night on tour?

JONO: The set varies from night to night. We have a pretty heavy master list to pull from that includes songs from all albums and covers, as well.

We shoot from the hip mostly, just call ’em and play ’em. It’s actually pretty engaging for us that way.

Riff Relevant [Brendan]: What do you think gives your playing its signature sound?

JONO: The volume might be the most noticeable. I’m swinging for the fences as soon as the set starts.

Riff Relevant [Brendan]: Any current sponsorships or your own signature gear? Any brand loyalty? Are you partial to one drum company over another?

JONO: No endorsements currently, but I am loyal to my Paiste Cymbals, Vater drumsticks, Remo Drumheads, and DW Drums and hardware.

Riff Relevant [Brendan]: What’s the most important piece of equipment currently in your live and recording setup?

JONO: I’ve played on a ton of back lined equipment over the years, on stage and in the studio. I’ve had to become comfortable with being uncomfortable with the gear provided.

Without a doubt though, if my drumsticks are undersized, things will get ugly quick in either setting.

Riff Relevant [Brendan]: Is there that one song that you just refuse to take out of your live set?

JONO: “Lonely One Kenobi” has been a resilient song, played at nearly every show.

Riff Relevant [Brendan]: What do you basically love about the drums?  Is it just the simplicity of the sound, or do you find that it’s more than just a percussive instrument for you?  Is it the only instrument you play?

JONO: I can’t pinpoint it. I’m just in love with it. I rely on it. I obsess over it. I can’t go long without it…

It’s a real relationship I have with drumming. It may be sick and twisted at times, but what relationship isn’t? Other instruments are gross.

Riff Relevant [Brendan]: What do you enjoy doing outside of music, that you feel ultimately contributes to your musicality?  For example, a hobby that you turn to in order to stimulate your creativity.

JONO:  If I’m not swinging the drumsticks, I’m usually swinging a hammer.

When I’m off the road, I’m working construction/carpentry. That contributes financially to my massive drumming addiction. Between those two things, I don’t have much other free time.

JONO: Break up with your girlfriend and spend all of your time drumming.

Riff Relevant [Brendan]: With Mos Generator, how has your songwriting process evolved since you guys started playing music together?

JONO: We’ve become more comfortable writing and recording music together. We’ve recorded and released quite a bit of material outside of the last two records for Listenable Records.

Remaining productive like that helps to build and evolve our writing relationship. Once you’re past any awkwardness or insecurities of writing music with new musicians, the fun begins.

Riff Relevant [Brendan]: What was the recording process like for Mos Generator’s latest album ‘Shadowlands‘? How did it differ from previous recording sessions? More laid back? More challenging?

JONO:  Tony (Reed) does all the engineering and production at his studio. It helps to be in that familiar environment. I live nearly 2000 miles away from the other guys, so that’s an obstacle, but not necessarily challenging. We just made time to do it.

Prior to beginning a tour, I’d come up early and we’d write and record material for the album. Three or four sessions over the course of a year, if I remember correctly.

Riff Relevant [Brendan]: What’s the most fun you’ve had out on the road with Mos Generator?

JONO: We let the good times roll! Sometimes it’s just being in the van on a long ride jamming tunes and cracking jokes, or sometimes playing a killer show/fest will keep you high for weeks…

Stumbling around foreign counties with friends seeing some of the most incredible places in the world is a blast.

Riff Relevant [Brendan]: How would you rank ‘Shadowlands’ among the Mos Generator catalog? The band’s best, or more of a transitional record?

JONO: It’s definitely transitional in the sense that it’s pushing the band forward with the new lineup and, in turn, establishing the “classic era” of the band with the original members.

The older records are incredible, I’ve been a fan of the band long before I joined or knew Tony. ‘Shadowlands’ still sounds like Mos Generator, but explores and incorporates influences that might not have been on previous releases. I think it’s a great record to add to the catalog.

It’s hard for me to personally rank the album amongst the others, but it has been received well by fans and friends that have listened to the band since its formation.

Riff Relevant [Brendan]:  Anything on the horizon for the band that you can tell us?

JONO: Canadian and U.S. dates in the Fall that include some festivals, a few dates coming up this summer, as well.

We don’t like to sit idle for too long, so there’s usually quite a bit in the works. All dates can be found on our social media pages**.

[**Descendants Of Crom and other live dates for Mos Generator can be found on their Facebook page.]