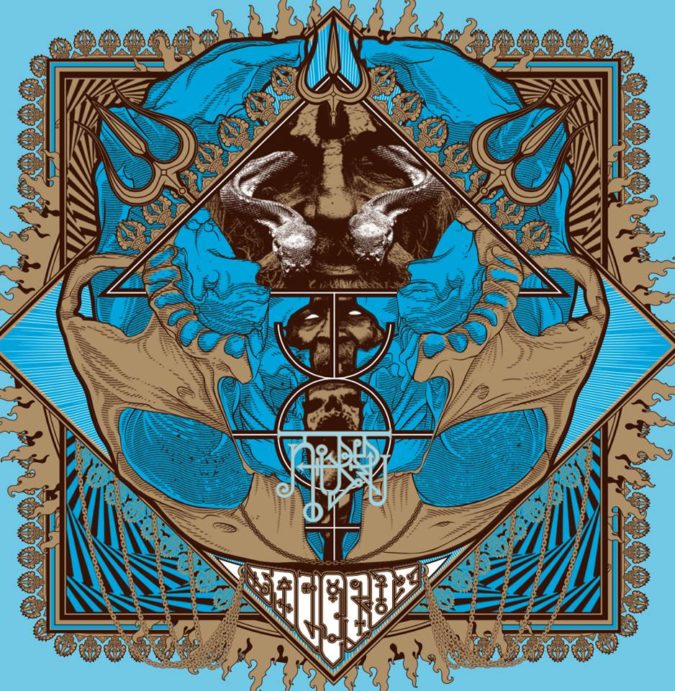 I don’t know how else to put this, so I just get it out of the way: Italy’s NIBIRU makes frightening music.

Sometimes I don’t think it is even music, but perhaps something more, something… unnatural. I have listened to NIBIRU for over five years, through a span of the ‘Teloch‘ EP and four previous full-length releases – two of which were reviewed here at Riff Relevant – 2017’s ‘Qaal Bablon‘ (review) and ‘Caosgon – 2017 Edition‘ (review). Each contains sonic elements that channel foreboding, ominous vibrations that will disturb any listener on some level, regardless of however honed they may be from their usual aural fare.

Earlier this month, NIBIRU returned with their latest experiment of malicious emanations, ‘Salbrox’, their first for Ritual Productions. The title means “Sulfur” in the dialect that NIBIRU profess themselves as practitioners of, the occultic Enochian, or Angelic, language. It is one attributed to “angelic celestials” that self-declared spirit medium Edward Kelley somehow conjured or encountered, as documented by astronomer, mathematician, and journal keeper, John Dee in the late 16th century.

Upon the rite of liturgy labeled ‘Salbrox‘, the trio NIBIRU – Ardat (guitars, percussion, vocals), Ri Salma (bass, drones, synthesizers), and L.C. Chertan (drums) – take us further off-world than ever before. With descents into decimating amalgamations of doom metal, blackened sludge, and ethereally textural psychedelia, the awareness of surroundings is soon shed.

To achieve this state, we must transmute our beings by means of the flesh-eroding first movement, “EHNB“. Nearly 15-minutes in length, this sinister feeling, drawn-out free fall is achieved via manipulated electronics, inconsonant intensities of noise, and periodically near-inhuman vocalizations. The latter includes guttural recitations and sparsely inserted evil chuckles at a point or two, the rest is perhaps an invocation.

If so, then it works, for what follows is the absolutely inauspicious “EXARP” (video below), an exercise in the unwavering, banefully slow battering of one’s soul. With wave after wave of dense, molasses speed sounds pummeling said soul, it serves to hold the listener captive as a dreading terror builds. You may feel like sighing a sense of relief when that is over, but the truth is this journey is just beginning to gain ground with the arrival of “HCOMA“.

Another elongated exploration, this construct is slightly less untoward on the surface. With more subtle nuances, or lighter qualities comprising its parameters, “HCOMA” seems not-so menacing… at least superficially. It moves in a simmering fashion, with feedback and fuzz-laden properties and a distant, but persistent squeal. The spine of this is manufactured by tribal drumming, not unlike that found on many Neurosis outings, particularly the ‘Through Silver In Blood’ era. However, the sense of relief that’s been slightly established is obliterated once the grunt-ish, animalistic vocals become known, even as infrequent as they are.

There is barely a break between the end of this and the surfacing of the next track, “NANTA”, just enough of one to draw a single breath. Should you do so, you will more than likely end up holding it as that ol’ feeling of “bad juju” jumps back into moderated action. Advancing at a crawling pace, this oozing mass is propelled by brawny drums amid a slow whirl of doomy instrumentation that soon takes us into “ABALPT“.

One of the more odd numbers (now that is saying something, in comparison here), “ABALPT” contains very limited musicality really. Instead, a lone voice bears verbal witness to something, or someone perhaps, either already present or upon their way, who outside of NIBIRU knows? What I do know is, despite very little evident happenings – the voice ends around the two-minute mark, while the total playing time is six and a half-minutes – the remainder subjects us to the blowing winds. There is the incessant whine of something among those air-streams though, lingering just out of sight, but not earshot, as these gusts fade into the distance.

“BITOM” is the shortest track presented, clocking in at an even four minutes and consisting of nothing but mostly isolated piano key strikes. By the time this ends, the listener may feel as if they have been lulled into a state of drowsiness. I know I did, at least a little. It will not last, for NIBIRU shall not allow it to, and they have the perfected antithesis to sedate sluggishness, “RZIORN“.

This is it, the destination sought by prior tracks, and the outcome reached, as this ungodly deluge of dense, doomed excess directs itself into your very soul. A crushing, decimating juggernaut of abominable, idiosyncratic audio chock full of maliciousness in every moment. It capably instills an undiluted dread as you listen, the tempest is a result of guitar, bass, drums, and… saxophone??! Yes, saxophone. Then there are those hellish vocals, shrieky and loathsome at times, guttural and contemptible at others.

NIBIRU executes a masterful annihilation of any and all possible tranquil tonality with the contents of ‘Salbrox‘. Moments in each composition, regardless of how seemingly minute, are ones that alienate the listener from even the implication that there is hope, that things will be alright. Doubtful indeed due to the severe nature of the after-effects once having heard this, the resonating apprehension, and scarring consternation it leaves in its wake. Once again, this awakened trio reaches further outward than they have ever before, and what they have drawn back from the void here is something to be feared…

…and streamed in this review or you can journey over to the Bandcamp dimension for further streaming and purchase options HERE.