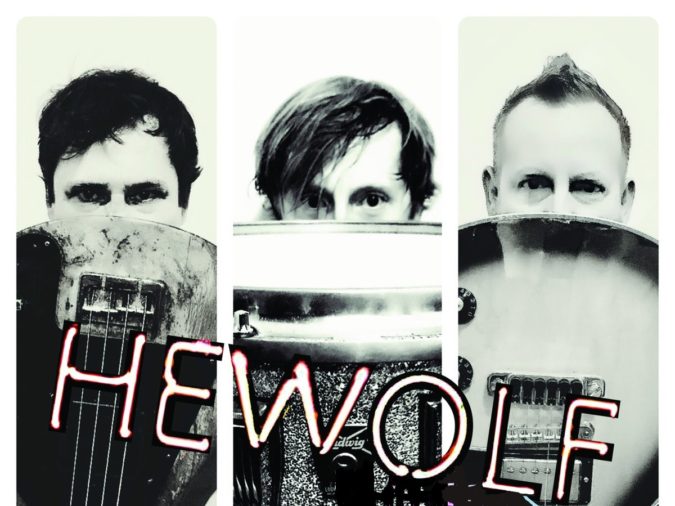 Richmond, Virginia has long been home to a constantly burgeoning music scene, one where each new day seems to bring a new band into being.

In recent years, RVA has seen the materialization of HEWOLF, a “supergroup” trio of sorts, comprised of guys whose collective pedigree is more than stellar. Between the three, they lay claim to such acts as Alabama Thunderpussy, Darkest Hour, Joyburner, The Medusa, Iron Reagan, Crackhead, and several other easily recognized bands. Within HEWOLF, bassist and vocalist Paul Burnette, guitarist and vocalist Johnny Throckmorton, and drummer Erik Josephson bring each’s stylistically diverse past to the table.

If you need further elaboration, each member has played in bands of differing genres and types. Here in HEWOLF there is no one set or single musical style to stay within the confines of. To hell with that, right? Clearly these three feel the same way, as they have quite the knack for alternating audio fluidity. One moment we get alternative rock, then aggro groove metal, or grunge, melodic doom, some punk, stoner rock, or anything else that strikes their fancy.

They do all of this so well, as evidenced upon the three official releases from HEWOLF, starting with the most recent, this year’s ‘Lilith‘ (review). It was preceded by 2018’s ‘Live For Minimum Wage‘ EP (review) and an eponymous EP issued in 2017.

As you can see, I have been a fan of the band for a couple of years now. As such, I am the type to take my shots when and where I can get them and this past summer provided me one that I could not pass up. Before we get to the part where the getting gets good, allow me to set the scene with a bit of backstory if I may.

The following interview took place in early July 2019, in HEWOLF‘s Richmond home base, on a day that was a particularly sweltering, hellish inferno of heat and humidity. Seeking to find a somewhat less-traveled location to converse with the band, we ended up on a riverwalk, in the shade beneath intersecting train trestles. In doing so, we periodically became subjects in the daytime spotlight of a gondola borne sightseeing tour of the town.

It’s true, these passenger bearing gondolas would float by in the river less than 10 feet or so from us, their riders ogling us inquisitively. They may have wondered, is this some type of historic re-enactment like the region is so well known for? Perhaps they were witnessing a drug transaction that some witless, unsavory looking types decided to conduct in view of their route? Whatever they were thinking, I would wager they were not anticipating our rather animated push to face them, mere feet away, and thrust the devil horns straight at them as we did!

Lastly, let me say this exchange presented quite a challenge post-conversation and there were points where I thought it would have to be scrapped. Thankfully, my trusted A/V wizard and photographer, Will Bouton, worked some fantastic editing magic, and presto change-o, here we are: Riff Relevant Interviews HEWOLF!