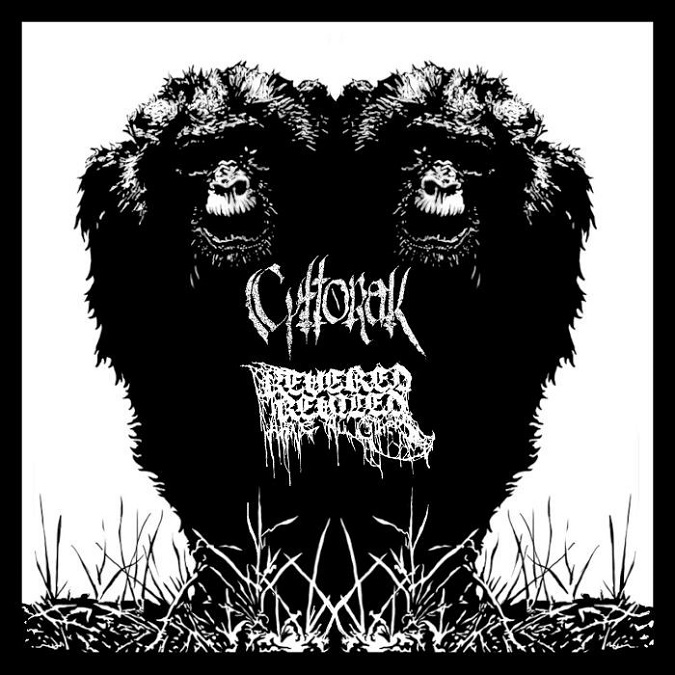 Providence, Rhode Island-based act CYTTORAK, in conspiracy with Sleeping Village Records and Revered and Reviled Above All Others, are starting the new year with a bang. One Split EP. Four tracks. Pugilistic sludgy heft. Unbridled doomviolence aggression. A couple of unexpected covers. In other words: a whole lot of fun in the extreme metal arena.

The (mighty) CYTTORAK fire things off with the (equally mighty) “Royal Shokan Dismemberment.” The track is rife with sludgy riffs, murky cosmic extremity, crusty hardcore brashness, and unmistakably animalistic – nay, otherworldly – howls. At just over three minutes, it stands as the longest track herein by a significant margin, which should say something about what lurks ahead.

CYTTORAK ends their half of the split with a cover of “Boxcar” by punk rock revivalists Jawbreaker, lending, as you might expect, a crushing sludge-laden weight to the classic tune’s infectious bounce. Today we have a premiere of “Boxcar” for you.

Details from CYTTORAK about their cover:

“We’ve talked about doing different covers since the inception of the band, but never anything that is even close musically to what we do. Even to this day we have plans on everything from Motown to bard songs from The Elder Scrolls. We just aren’t that interested in covering a song if we can’t completely tear it down and turn it into something new and gross. The other two guys have been and currently are in pop punk bands so this one made sense to do first. I won’t lie though, this has always been one of my favorite songs from any band from any genre and I’ve wanted to cover it for a million years.”

Revered and Reviled Above All Others
01. In Porcos Laqueo
02. Gut Feeling (DEVO cover)

Not to be outdone in the aggression department, doomviolence duo Revered and Reviled Above All Others brings up the back half with a pair of furious albeit brief exemplars of their trademark portmanteau of doom and powerviolence. Their first offering, “In Porcos Laqueo,” features unmistakably mammothian riffage and chaotic vocals wrapped up in gloriously succinct fashion. Their second track, “Gut Feeling,” is undoubtedly the most visceral DEVO cover you have (or will) ever experience. Like everything Revered and Reviled Above All Others touch, these two tracks are absurdly heavy, yet never outstay their welcome.