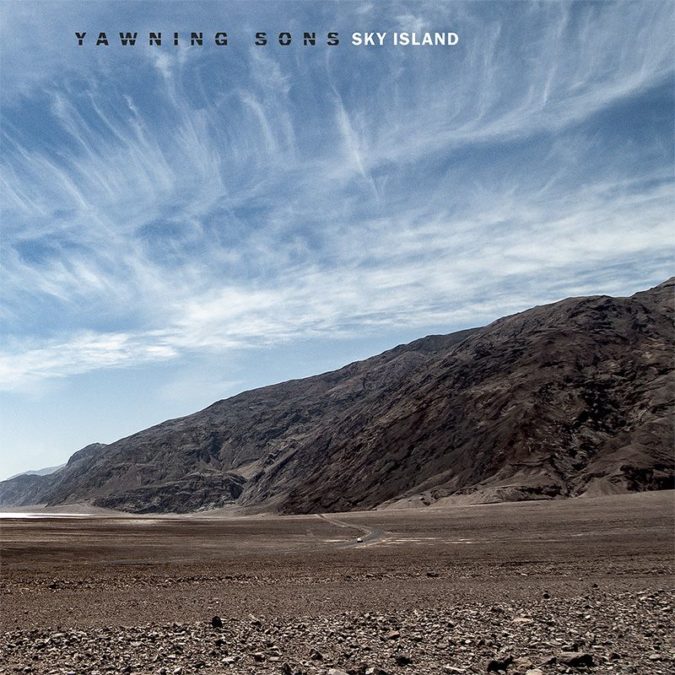 Their debut album ‘Ceremony to the Sunset‘ was released in 2009 to near-universal critical acclaim, and within five years was re-released on vinyl, heralded as a “desert classic” and YAWNING SONS had progressed to cult status. For ‘Sky Island‘, the original YAWNING SONS lineup that delivered the ‘Ceremony to the Sunset‘ debut returned, once again including exclusive performances from Mario Lalli, Scott Reeder, and Wendy Rae Fowler.

“We always loved Orquesta del Desierto, so having Dandy join us means a lot and feels right.”

In case you just want to have a peek, in addition to the album stream via Bandcamp, the first two singles, “Shadows and Echoes” and “Cigarette Footsteps” are also streaming via YouTube.

Before they gathered in Joshua Tree, the YAWNING SONS story started in 2008. During the pre-production of their then-second album, Sons of Alpha Centauri invited Gary Arce from Yawning Man and Big Scenic Nowhere over to the U.K. to work with them to develop and record some of the material.

From the very first initial session, it was evident that something unique and special had been born. Drenched in reverb and swirling in chiming guitars and soaring melodies, the band YAWNING SONS had taken flight.

The ‘Sky Island‘ album’s opening track and lead single “Adrenaline Rush” sees the core band driven by Gary Arce‘s mystical Yawning Man tones and the signature SOAC bass drive of Nick Hannon driving the hard rock vibes. Marlon King, with his alluring vocals, sets the tone for what will surely be one of the purest desert rock albums of the decade.

‘Sky Island‘ is indeed an album that captures the essence of musical ambiance, being drenched in reverb with chiming guitars and soaring melodies. The overarching vibes of heat and sun permeate through the record, with the scenic identity of the record shifting towards the sheer scale of the mountains, the valleys, and ultimately, the sky.

These are stories that can only be told by the narrators on these tracks, and bind a story and a winding path. The sunset is eclipsing — look to Sky Island!

Mastered by John McBain (Desert Sessions, Monster Magnet), ‘Sky Island‘ is available on March 26th, 2021 (today), via Ripple Music, and can be ordered now in the following physical formats, as well as a digital download: