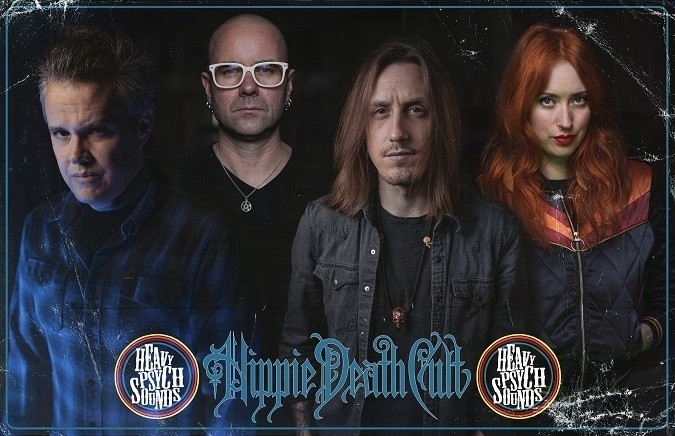 Kaleidoscopic in its sonic palette, ‘Circle of Days’ is the sophomore album from Portland, Oregon‘s psychedelic doom quartet Hippie Death Cult. The album is like listening to a radio station from an alternate reality; the waves are filled with a mournful sense of deja vu, a painful nostalgia for the present.

For an album created in 2020, it carries with it the year’s nervous tensions and extended sorrows, but it also refuses to wallow. There’s a light at the end of the tunnel: it’s vibrant and worth fighting for. In addition to the full ‘Circle of Days’ album audio stream and review, we also have the band’s latest video single for the first track “Red Meat Tricks“, which is streaming below…

Less riff-focused than its predecessor ‘111′ [review], ‘Circle of Days’ shows the evolution of Hippie Death Cult. Eddie Brnabic (guitar), Ben Jackson (vocals / keys), Ryan Moore (drums), and Laura Phillips (bass) have come together to create a unique, monolithic sound. While there’s an awareness of the Great Ones — Soundgarden, Rush, Tool, Sabbath — these looming figures are approached with reverence.

Take for instance the second track, “Hornet Party” which bounces masterfully between “Flight of the Bumblebee” and “Black Hole Sun.” This creates a nervous tension between moments of manic, buzzed-out chaos and the painful beauty of clarity. The lyrics reflect this tension as Ben explores themes of the political paranoia of 2020. Behind all this chaos that sounds like a buzzing party of hornets is the ominous Hornet Party, who uses this chaos to “seize on tragedies” and “manipulate us.”

From there, the album takes an introspective turn, which is where it blossomed for me. “Walk Within” is a stripped-down piano-driven ballad. Flush with harmony and a sense of internal barrenness, this isn’t a style of song we’ve seen too many heavy bands pull off in recent years.

After, we reach the title track, “Circle of Days,” a psychedelic doom tune with a propulsive, meditative rhythm section. While the track is nearly 10 minutes, there’s a progressive sense of drifting and returning. To conclude we’re treated to a tasteful, melancholic solo delivered by the hands of Eddie, which is one of my favorite moments on the record.

The album concludes with the apocalyptic and explosive “Eye in the Sky,” which blends moments of epic riffing, pensive psychedelia, and, of course, some sick fuckin’ shreddies before it drifts off into a proggy, melodic outro into oblivion.

‘Circle of Days‘ is available on vinyl and CD from Heavy Psych Sounds and is streaming on all major platforms as of Friday, May 21st, 2021. If you’re a vinyl collector and first editions matter to you, be sure to snag one before they sell out. Grab a copy at Heavy Psych Sounds, HPS USA, or on HPS Bandcamp.

Hippie Death Cult loves to spread their psychedelic love on the West Coast, so if you’re not going to be able to catch their co-record release party with Robots of the Ancient World in Portland, you might still have a chance this year.