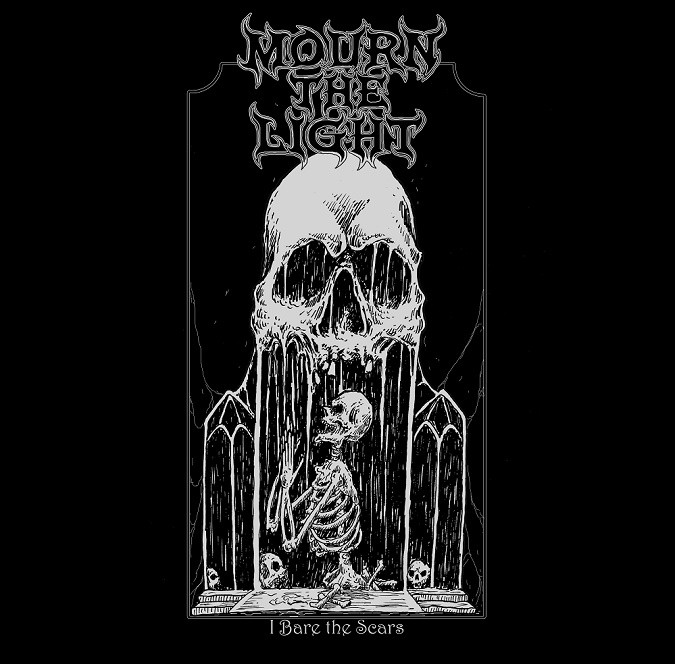 Connecticut, US heavy doom metallers MOURN THE LIGHT are almost set to release their debut album, ‘Suffer, Then We’re Gone‘, through Argonauta Records. Today we have a premiere of the new video for the latest single “I Bare The Scars.”

MOURN THE LIGHT was formed in early 2018 by Dwayne Eldredge, co-founder of the New England Stoner and Doom Festival. Driven by his passion for thunderous, traditional doom metal mixed with lofty progressive metal leanings, Dwayne was hell-bent on creating a band that could sonically push a message of hope in spite of despair.

The band released its debut EP ‘Weight Of The World‘ in June 2018 [review], then a second EP ‘Death is Lurking‘ (a split with Oxblood Forge) in September 2019. After touring the US and Canada, including festival appearances at Stoner Jam ’19 (during SXSW) and the second NESD fest, MOURN THE LIGHT returned to the studio to record their first full-length album.

‘Suffer, Then We’re Gone‘ has a plethora of influences showcased, yet made all their own. At one moment, MOURN THE LIGHT delivers crushingly massive riffs, only to jump at the next turn, galloping along with shades of classic power metal taking hold and leading the way — all the while focused on incredibly memorable songs, with catchy hooks and sing-along choruses.

“‘Suffer, Then We’re Gone’ is the culmination of hard work and determination to create something meaningful and special to us.” says guitarist Dwayne Eldredge. “We have grown as a band so much over the last couple years and we think it really shows in our latest work. We are a metal family working together on our heavy metal legacy and we are proud to be working with Gero and Argonauta Records. We can’t wait to see what the future holds. Looking forward to getting out on the stage again soon…”

“I Bare the Scars” is the second single off MOURN THE LIGHT‘S upcoming debut album. With album artwork by Brouemaster Visual Decay and the band’s logo by Diko Nursyahra, the new release features guest keyboards on “When the Fear Subsides” and “Wisdom Bestowed from Tales of Woe” by Alex Newton. The album was recorded at Studio Wormwood in Mansfield, Connecticut. ‘Suffer, Then We’re Gone‘ was produced, mixed, and engineered by Dave Kaminsky, with mastering by Ryan Williams at Augmented Audio in LA.

Guitarist Dwayne Eldredge gives some details about the song “I Bare the Scars” and its new video:

“The song came together last-minute, before going into the studio to record an album we thought was already done. It speaks about regrets and long-lasting pain caused by dishonesty and the loss of those you care for because of it. It’s part of an album that takes you on an emotional journey with some uplifting highs and the most depressing lows.

“The new video was shot on a band retreat to a cabin in Vermont in August 2020; it was a great experience as a band, as friends, and as amateur DIY music video makers.”

‘Suffer, Then We’re Gone‘ releases worldwide on July 2, 2021, via Argonauta Records. Pre-orders are open now for the color vinyl pressing, CD, or digital download. There are also a highly limited amount of special fan bundles (USA only) that include a copy of the color vinyl with a signed 8×10 photo, an album artwork t-shirt, embroidered patch, and stickers. Order the version of your choosing at one of the following locations:

The band also has several live shows scheduled on the East Coast for the rest of the year, including an appearance in August with The Obsessed and The Skull, as well as a couple of showcase and festival dates further down the road of time. Check out the list of tour dates below: