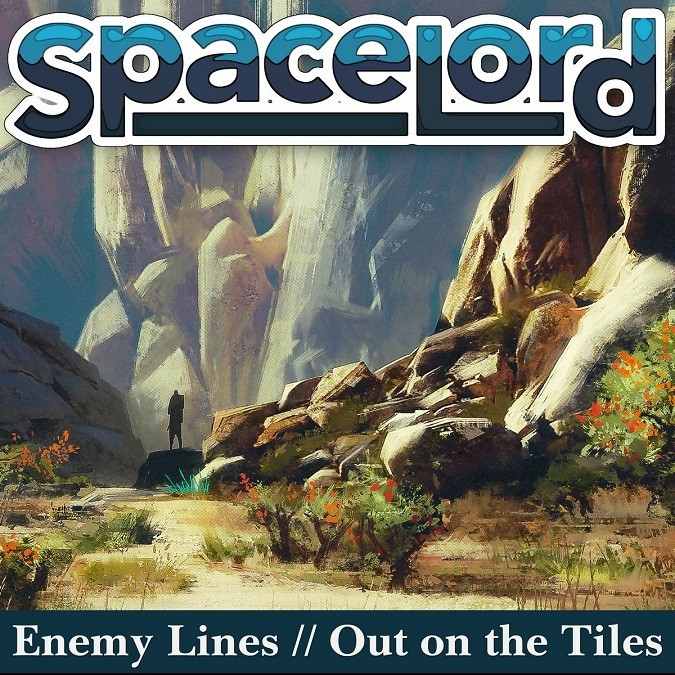 Starting with A-side “Enemy Lines” – inspired by Russian science-fiction novel ‘Roadside Picnic‘ – the band space-cowboys up with soaring verses and an anthemic chorus. With video artist H. Pattison back in the saddle directing a creepy memetic collage of terrifying otherworldly intrusions to accompany the song debut last week (video stream below).

The A-side is, of course, paired with a B-side… which gifts us none other than a howling cover of Led Zeppelin’s “Out on the Tiles.” The exclusive audio stream of that track is premiering today. First, a quick interchange about the new cover from the duo of Ed Grabianowski (Vocals, Drums) and Richard Root (Guitars, Bass):

Rich: “It’s no secret Ed and I are big Led Zeppelin fans and so when we decided to do a few covers Out on the Tiles was the first song to pop into my head out of all of the tunes that exist. The thing is that when it came time to make the decision for this project I determined that it’d be more clever to do something out of left field for us.“

Ed: “Rich mentioned that he’d considered doing a Zeppelin cover, but that it would be too obvious since they’re such a clear influence on us. So I suggested we could do one of their lesser known songs. I had a few in mind — Four Sticks was another one — but I threw out Out on the Tiles. I’ve always loved that song and how pure and joyful it is. And Rich was like, “That’s exactly the song I was thinking!“

Rich: “Which blew my mind because I don’t think we ever really talked about that song before. It was crazy to me that of all the songs Ed thought I would choose it would be Zeppelin’s Out on the Tiles. Either we both have psychic powers or are just so dialed in we may as well call them psychic powers (or a second marriage).”

“A few years ago we played a Halloween show where we dressed up as Led Zeppelin and did a set of covers,” said Grabianowski. “Even Stairway. But I was more intimidated by trying to do Bonham’s drums for this Zeppelin cover than I was trying to do Plant’s vocals. This song is so fun to play though. It’s ridiculously happy.“

Shortly after forming in late 2016, the band released a début EP ‘New Horrible Menace‘, which was quickly followed by their first full-length in the Fall of 2017. We reviewed that first ‘Spacelord‘ album, as well as their second, ‘Indecipher‘ [review], which launched in November 2018 via Kozmik Artifactz.

SPACELORD made the Doom Charts with those first two albums and played both the Descendants of Crom Festival and the Music is Art Festival in 2019. When the pandemic hit, they were already undergoing changes, with the core songwriting team of Root and Grabianowski preparing to record as a duo. That turned into remote recording sessions and heavier use of acoustic guitars.

The third full-length album from SPACELORD will be released in November 2021.

1 thought on “Exclusive: SPACELORD Premieres “Out On The Tiles” [LZ Cover] Single”