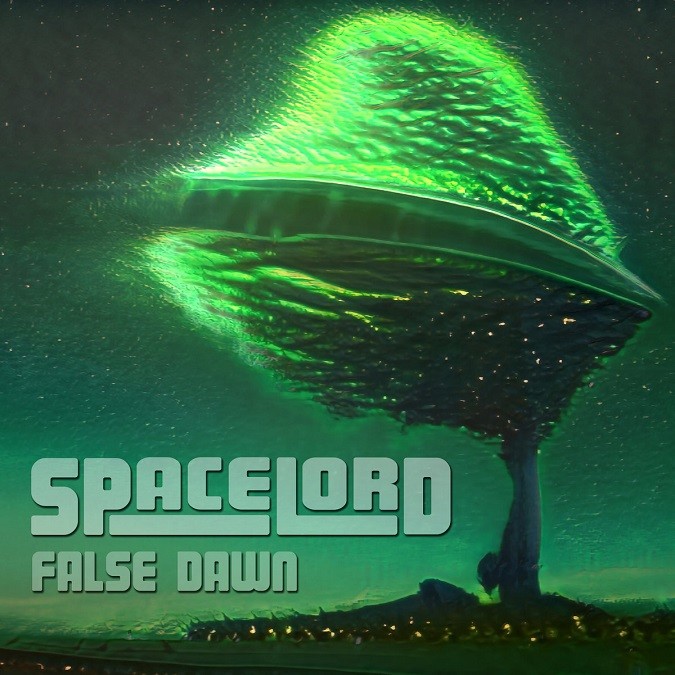 The Buffalo, New York stoner rock act SPACELORD will release their third album, ‘False Dawn’ on November 5th. Today, we have an exclusive audio stream premiere of “Breakers“, the latest single off that new album.

The cosmically evocative cover art was not created by human hands – it was generated by an AI program called Artbreeder.

“I love that this art feels powerful even though its creator had no way to imbue it with meaning, or really any concept of meaning at all,” said singer Ed Grabianowski. “As you look at this art, you realize that the responsibility for deciding what it means or represents is entirely on you. Everyone I talk to sees something different in it.“

‘False Dawn‘ draws together the heavy blues band’s many influences, from ’70s acid rock like Led Zeppelin and Black Sabbath to the dark, heavy sounds of Soundgarden and Alice in Chains.

“Some of the music was written in the days and weeks that followed the death of my brother, while some others were concepts I had wanted to explore for a long while,” said guitarist Rich Root. “We’re taking the personal impressions of all of our influences and amalgamating them into something that makes us feel like the music we love makes us feel.“

Shortly after forming in late 2016, the band released a début EP ‘New Horrible Menace‘, which was quickly followed by their first full-length in the Fall of 2017. We reviewed that first ‘Spacelord‘ album, as well as their second, ‘Indecipher‘ [review], which launched in November 2018 via Kozmik Artifactz.

When the pandemic hit, SPACELORD was already undergoing changes, with the core songwriting team of Root and Grabianowski now recording as a duo. That turned into remote recording sessions and heavier use of acoustic guitars.

After hearing the premiere of “Breakers” above, you can have a listen to all the other available tracks from the album streaming below. The third full-length ‘False Dawn‘ from SPACELORD will be released in full on November 5th, 2021.