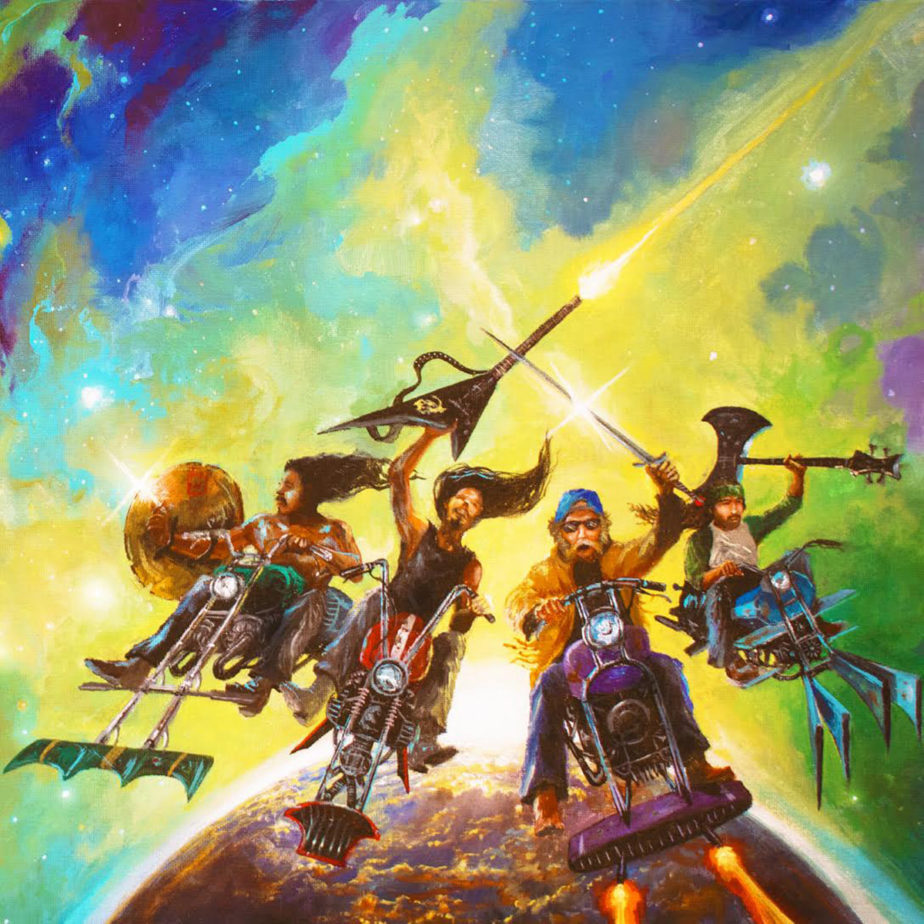 With this release, two of our Riff Relevant staff writers – Pat Riot and Halsey –  independently chose to review ‘Chapter II: Of Earth’, which I consider a fun glitch in our metal matrix. We’ve included both reviews here to demonstrate the wonders of how all of our ears hear music and interpret it differently. I’ll wager the GEQ gents won’t mind a random two-in-one review.

GREAT ELECTRIC QUEST is seemingly on the road on a constant basis, so if you have yet to see them live, get out there. They are indeed a sight to behold. Much fun, much loud, much mayhem. DO IT. In the meantime, click play on the Bandcamp stream below and enjoy these impressions of ‘Chapter II: Of Earth’ from Pat and Halsey ~ Leanne

Now, when it comes to truly championing the ethos of proto-metal and traditional doom influences in modern music, no one does it better than GREAT ELECTRIC QUEST. What they have imagined, then constructed, and now have successfully executed here, is a work of impressive magnitude. Just that Duel’s Jeff Hensen produced this record, and Mos Generator’s Tony Reed mastered it, speaks volumes as to its overall significance.

Over the span of seven songs, the listener is taken on an incredible journey permeated with mystical characters and accentuated with captivating sonics. It all starts with “Seeker Of The Flame“, very much a throwback to the age of such metallic foot soldiers as Judas Priest or Budgie. Powered by an ever-advancing, wahhed out riff propellant, the song is a colorful cut rife with a vintage aesthetic to it. While each component of it is quite richly presented, it is a vehicle of sorts for the outstanding kit work of MuchoDrums (Velasco). The man absolutely shines with bashing brilliance on “Of Earth – Episode 1 – Creation“, the second track here.

With aural inflections reminiscent of Thin Lizzy at times, the song is a breathtaking start to a three-part movement. The second and third parts of the trilogy are presented as “Of Earth – Episode II (Destruction) & III (Ancient Machine)“, where an underlying message of Man’s harming Mother Earth is presented within fantastical emanations.

We now arrive at the spectacular blues-infused, metallic doom discharge that is “Anubis“, perhaps my favorite track. Explosive, slower-paced, over the top-heaviness, hits you in wave after wave of guitar and rhythm. It is carrying a hellish, higher-pitched vocal at times, one that screeches and claws its way into your skull. In Egyptian lore, Anubis is “god of the tombs and weigher of the hearts of the dead”, a deity for the deceased, it sounds. Here, “Anubis” is adapted into a crushingly dense, audible descent into the darker recesses of this conceptually thematic album.

That downward spiral is halted, then met with the uplifting energy and faster paces of “Wicked Hands“. With abundant grooves, increasing energy, and tight-knit interactions, the quartet hit a fine stride within this number. Harmonious guitar tones and galloping drums empower this one, at times bringing to mind a similar type of output to another current act, Valkyrie. With two songs left to go, we enter the retro psyche-fuzz feel of “The Madness“, a very Seventies-ish feeling song, to say the least. Once the bass lines bring us in, the cut comes off as fast ‘n loose, the guys engaging themselves in more or less a bit of loosely structured jamming.

“Heart Of The Son” is the end piece to this opus, a somber song for the most part, where prophetic forewarning contrasts lyrically with past events. The accompanying music is sullen, serving to starkly augment the gloomier nature of the tune. Acoustic strings occasionally bubble up, as the song itself travels a crescendo path, gradually building, increasing to an imagined breaking point. Once reached, there’s a return to bluesier passages, ones given subtle flavoring via organs and controlled-burn guitars, doing their thing to the very end.

I am always encouraged by such grand, album-based gestures as “Chapter II” from GREAT ELECTRIC QUEST. In an age when many folks mistakenly proclaim “Rock ‘N Roll is dead”, a recording like this comes along and obliterates such an absurd notion to smithereens. Don’t just take my word for it, delve into the album’s stream above or jump over to Bandcamp [HERE] to stream and purchase it.

WARNING! EMERGENCY ALERT: *THIS IS NOT A TEST*
As mandated by the authority granted to me courtesy of Riff Relevant and in accordance with the Constitution of The United States of America, I Brian Halsey, hereby abolish usage of the phrase “Face Melting Riffs.” GREAT ELECTRIC QUEST has completely obliterated the terminology, thus rendering it useless to describe the shredding of any other band.

If you’re not a total jackwagon then you’re already familiar with GREAT ELECTRIC QUEST. They’ve been a formidable hard rock band since 2010. You could rely on them for heavy music and good vibes, but not anymore. This time they are out to destroy.

Ever since making illegal contact with renegade alien forces on the outskirts of our solar system, the doods of GREAT ELECTRIC QUEST have acquired an arsenal of intergalactic contraband, making it virtually impossible for all other rock ‘n rollers to sustain life in their coordinates.

‘Chapter II – Of Earth’ sees the band make a quantum leap not seen since the Egyptians harvested ancient knowledge from the secrets of the Giza plateau. GREAT ELECTRIC QUEST throws it the fuck down, so fucking hard, I found myself tilting my head back and just laughing as loud as I could during my first spin of the album. The second track “Of Earth – Episode I – The Creation” has so much swagger, you’ll feel confident enough to melvin the Grim Reaper as you groove to the most over the top drum solo / guitar solo I have ever heard packed into one song.

Buddy Donner (Guitar) and Daniel “MuchoDrums” Velasco (drums, as if that wasn’t obvious) gives a refreshing reminder that there are no rules in rock ‘n roll, and you can be as awesome as you please. Their musicianship is a concoction of flamboyance and precision. It’s the kind of asshole move you only pull if you love what you do, and you’re great at what you love. The back to back tracklist featuring “Of Earth I” and “Of Earth II / III“, will put hair on your chest and sweat on your brow.

Tyler “T-Sweat” DIngvell makes his presence felt by channeling the ghost of Axl Rose on “Anubis”. (I know Axl is technically still alive, but Appetite for Destruction Axl is long dead, so what good is he doing?). The electric vocals combined with a slower, heavier riff provide another change of pace in an album rocking with diversity. Jared Bliss is infectious on the bass throughout, making CH2 their most complete album to date.

Recorded by Dan Frick, produced by Jeff Henson, mastered by Tony Reed, released by Totem Cat Records, and album art epically executed like a fucking champion by Adam Burke. Kudos to your artistic vision Mr. Burke, if you ever wanna get drunk and watch Ancient Aliens, hit me up. I bet the Mayans had space motorcycles like that way back when Pacal ran shit, but I digress…

GREAT ELECTRIC QUEST crank out some serious throwback heavy metal on ‘Chapter II: Of Earth’. It’s loud, it’s fun, but most importantly it’s really impressive. Some songs are epic, some are straight bangers, the album hits just right by clocking in at 36:41 minutes. It gives you something juicy to sink your teeth into but doesn’t dick around and become overwrought with pretentiousness.

We all know the deal with music these days. There’s a ton of good content out there and it can mostly all be streamed free, but when you hear something you’re probably gonna listen to over and over, it’s wise to just make that jawn part of your family.

If the American flag could be personified, but that person was a guitar, that guitar would be the embodiment of GREAT ELECTRIC QUEST. That guitar would also shoot lightning and out drink Andre the Giant and Wade Boggs at the same time. Way above is a stream of the album and below a link to where you can fire that sucker right into the shopping cart icon.

“Go fuck yourself, San Diego” – Ron Burgundy….and also me… and also G.E.Q. with those riffs.

GREAT ELECTRIC QUEST has a live appearance at the second annual Heavy Mash Fest, alongside some other amazing acts: