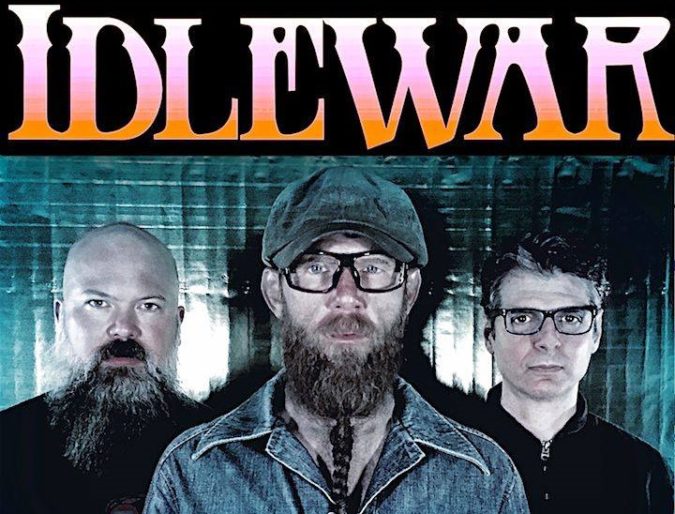 When it comes to music, Orange Country, California is known more for being home to bands that exemplify a variety of different genres and styles.

From punk/hardcore type acts like Uniform Choice, Ignite, Throwdown, Project 86, or The Offspring, to metalcore ones like Eighteen Visions, Bleeding Through, Atreyu, and Stick To Your Guns, the O.C. is OK indeed for that kind of stuff. Then, every once in a while, something truly exceptional will arise from there, say, like Morgion, Eyes Of Fire, or Fu Manchu.

In recent times, IDLEWAR, have arisen, who, unlike several of the bands I named above, are definitely constructing their own unique musical identity. I am convinced their recent, independently released third studio outing, ‘Fractured‘, is a monumental statement in establishing this fact.

Over the expanses of its 11 tracks, the IDLEWAR trio – James Blake (vocals & bass), Pete Pagonis (drums), and Rick Graham (guitar) – unfurl a potent melding of contemporary rock, with progressive metal and traditional doom-tinged elements. The album, which was also produced by the band’s Pagonis, delivers an impacting avalanche of striking, soulful sonics that emanate a type of metallic blues at times.

From the trip-tinted psyche touches that begin and eventually unveil the chunk-hewn first song “Turn To Six“, this is enthralling, infectious music. With pulsing riffs, staggering rhythmic bursts, and piercing drums, the music is as hypnotic as it is hard-hitting.

The truth is each new cut that comes forth ups the ante somehow, almost making you forget what preceded it. “Escape“, “Stab“, “Rage“… one throttling rocker after another lands like a prizefighter’s finest. The song that places before “Rage“, “Drama“, sort of breaks the mold of its book-ending accomplices with a much more melodic, slower advance. Minimalist in content and sedate in presence, it yields one of the album’s more profoundly passionate compositions, without question.

The IDLEWAR three are not one bit shy about imbuing their songs with gargantuan groove, either. Just one listen to “Alone“, “Enough“, or the astounding swagger of “Demented“, and you will find yourself caught in the gravity of their deep ruts.

It must be mentioned that one of the unmistakable strengths of this record, as well as the band’s, are the simmering, expressive vocals of James Blake. The guy is a real powerhouse of emotive verbalizing, so fervently intense that each song becomes a more moving experience in that aspect.

For me, it feels as if a shift takes place in the trio of tunes that appear last on the album, “Perfect Disaster“, “Odd“, and “Hope“. There seems a palpable detour into a heavier, more metal-oriented styling, which just further confirms the broad swath of auricular abilities that IDLEWAR wield.

I find myself hoping that this massively gratifying album from IDLEWAR, ‘Fractured‘, does not fly under the radar for fans of underground music. Personally, I have garnered immense gratification from it, from its uniqueness and the mold-shattering sum of its songs. So do yourself a great favor: Stream ‘Fractured‘ now in this review or get over to Bandcamp [HERE] for further streaming and / or purchase options.

I fully expect you will be thanking me later. Also, if you live in the U.K. or in that vicinity, you can catch IDLEWAR live on their upcoming “2018 UK Fractured Tour” in November. Find the full itinerary at this LINK.