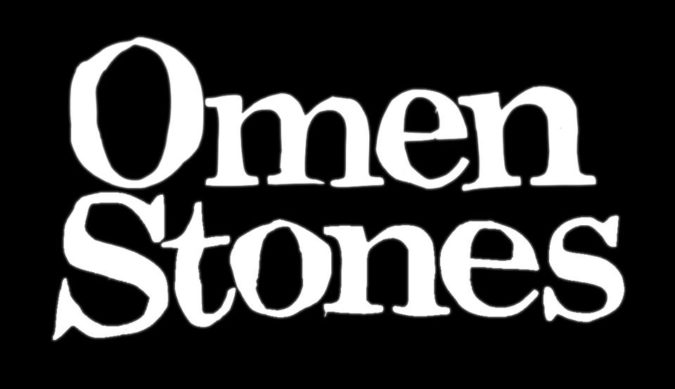 Coming up from the underbelly of Richmond, Virginia, the city that just keeps on giving us fantastic bands from its music scene, comes the official first release from OMEN STONES.

Like so many other acts from RVA, the trio of members in OMEN STONES are veterans that either are in or have been in some well-known acts. Guitarist and vocalist Tommy Hamilton hails from Druglord, bassist Ed Fierro from Desert Altar and Tel, and drummer Erik Larson has punched a time card in way too many bands to list – but they include current ones such as Backwoods Payback, Avail, and Roy Batty.

Following Erik from band to band for many years now, I am stoked to hear his return to something slightly absent in recent years: playing metal. Make no mistake about it, OMEN STONES is indeed a metal band and there is no misconstruing this fact once you have heard them. From the thick, incendiary guitars, ballistic bass lines, and kit-battering drums, there is so much metallic ore here that a hundred large-scale smelting operations would be hard-pressed to handle it.

There is no pondering needed for these facts either, just click play and you’ll become a believer before the lead-in song, “Sympathy Scars“, is finished. The screech of feedback announces the song before a barrage of fuzzed-the-hell-out riffs roll in, the drums going through paces of restraint then frenzy. There is a subtle thrashy quality to the track, helped in part by Larson‘s double-bass passages, while the vocals have a slightly unusual inflection to them… but I’ve got it! They are what one might imagine a melding of Voivod’s “Snake” Bellenger and Udo Dirkschneider might sound like.

As good as the start to the album is, there are increasingly better and better tracks unfurled as the trio traverses a lot of musical terrains. There’s the doom ‘n groove of “Black Cloud“, the blistering, semi-speed metal tempest of “Fresh Hell“, or the bit more laid back jazzy, southern vibes of “Secrete“. Then there is the trio of songs that fall consecutively at the latter half of the album, ones that are clearly some of its heaviest contents.

“Fertile Blight” is the first of them and I know to some it may be sacrilege for me to say, but this immediately brought to mind the classic Acid Bath song “Jezebel“. The dizzying paces of the song, the general tone of the instruments, those staticky vocals, all combine like the perfect storm. The song provides a non-stop ride upon one of this record’s heaviest selections to be sure.

Following it, “Purity Jones” and “Flowers” – with the first of them, “Purity Jones,” being a song stylistically reminiscent of the earlier mentioned Voivod. These are some of the album’s most melodic nuances yet, ones channeled in at points. But don’t get too comfortable with them, as they definitely take a backseat to the avalanches of rapid-fire instrumentation that drives the song, and the guitar leads and solo suit things nicely.

“Flowers” has a much fuller jam quality about it, the trio finding the pocket and the groove rather quickly and climb right into it. From that point, the song’s serpentine tempo twists and timing turns are fluid and fierce as the lyrics expound upon some hard-taught life lessons. After all, aren’t we all just really “dying to live again“?

Now, I’m not sure what actual omen stones are if anything. Might they be rocks used in prophetic future telling? Maybe, I’m not saying they are or aren’t, because hell they could be pet rocks for all I know. However, they do exist in band form, one brought to us from the RVA region and astoundingly kicking serious ass on their first, official initial outing.

Stream the OMEN STONES self-titled album in this review, but I suggest you head over to Bandcamp where it is currently available as an NYP (Name Your Price) download. I dare say this will be one of the best things acquired by anyone should they take advantage of that designation.